It’s been nine years since the global financial crisis (GFC) and the global economic outlook has finally started to improve, with the upswing expected to continue into 2018.

However, there are structural challenges ahead such as persistent low inflation and productivity growth, as well as aging and – in some countries – diminishing workforces.

Economic trends abound with shifting ground, as we are in a digital age where pervasive technological advancements are disrupting markets, economies and business models.

From a global market perspective, our key insights for the year ahead are:

Size and growth of the global economy

The size of the global economy is over US$70 trillion.

Australia is a relatively small contributor, being worth ~US$1.3 trillion and accounting for only about 1.6% of the global economy.

The Australian economy has remained relatively static as a percentage contribution to world GDP from 1990–2016.

Outlook improving for US and China

Looking forward, China and the US’s relative contributions to global GDP are showing signs of growth and improvement – China’s relative global GDP contribution is increasing at a rapid pace (as seen in 2010–2016 figures).

During the same time, the Euro region and Japan are showing continual decline in relative contribution to world GDP.

The two primary groups contributing to this forecast are ‘Advanced Economies’ and ‘Emerging and Developing Economies’. 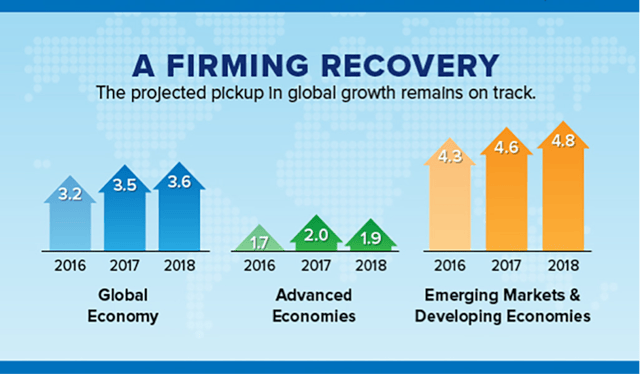 This moderated growth is due to lower projected US growth, under the assumption of neutral fiscal policy (not the previous expansionary policy expectations), offsetting higher projected growth in the Euro region.

Emerging Markets and Developing Economies include:

This growth forecast primarily reflects stronger projected activity in China and in emerging European economies for 2017 and 2018.

In the short-term, global economic growth is gaining momentum and is broad based.

However, strong and sustained medium-term growth is far from secured.

Structural headwinds such as broad-based low inflation and weak wages and productivity growth in many economies – both advanced and developing – pose a risk to mid-term growth.

Other Emerging Markets and Developing Economies

This Global Economic Outlook has been prepared by JPAbusiness

Phillip and Alex provide JPAbusiness and its clients with financial and business analysis, research and support services across a range of client requirements and in-house projects.

Prior to joining JPAbusiness, Phillip (pictured above left) studied at the University of Canterbury,

New Zealand, where he graduated with a Bachelor of Commerce, majoring in Economics and Finance.

Alex (pictured right) holds a Bachelor of Business and Commerce, with a major in Accounting, from Western Sydney University.

Alex previously worked in accountancy firms in the Sydney CBD and brings an energetic and passionate approach to assisting clients with growth and exit strategies.

Forecasts for the Australian economy in 2018 are cautiously optimistic, driven largely by improving global ...

In this video JPAbusiness business analyst Phillip James presents a brief snapshot of our 2018 Global Economic ...